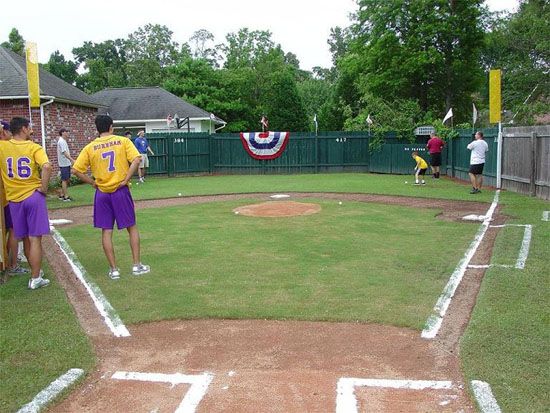 The classic games we played as kids, are sometimes the best way to program! Two of my favorite games from growing up were Wiffle Ball and Tennis Ball Baseball. I am a 80’s kid, and we didn’t have cell phones, but we did have Nintendo. For some reason, Nintendo didn’t occupy all of my time, and I still played outside for hours, sometimes all day. I wish kids played outside all day, it is definitely not the same. It doesn’t have to be that way when you have kids and staff in your programs. Bring back the classics, and for the kids or staff, this may be brand new to them.

Pictured above is a custom Wiffle Ball field I saw online. I was searching through some old pictures of “Wrigley Field” that my staff and I built, but couldn’t find it! I can try and explain! We were trying to think of a way to change up the fields at camp, especially since we were at an elementary school. We went to Home Depot and bought orange construction fencing for the outfield walls, lined the field, put real bases down, and even had a pitchers mound. We then went to Michael’s, and bought fake ivey to weave in and out of the construction fence. It was so awesome! We used it for a kickball field too! We wanted to build a space for kids and staff that made the game even more fun. Wiffle Ball is an easy game to play, it is just like baseball, and numerous age groups can participate. Simple innovation to a game and playing space can make a huge impact!

Tennis Ball Baseball is something that we did growing up. We would go in the backyard and have a mini home run derby. If we hit the house, it was a home run, and if we hit it over the house it was a grand slam. I don’t recommend playing with a house as we knocked out my parents window one afternoon, and that shut the game down very fast. I suggest playing in a field, creating a home run fence/boundary, and letting the participants hit the tennis ball as hard as they can. You can definitely play this as a home run derby or just a fun game like kickball is played. Most people that play get excited, because its easier than baseball, and its fun to hit a ball as hard as you can! We just did this game with our staff team at a local park and used their baseball field for some team building. I also had Taylor Swift blasting at midfield on a portable speaker!

These games will be listed in the resource zone. It’s ok to go old school, and play the games you did as a kid. I am 36 and when I play these games, I feel like a kid again, and all is right in the world! Simple fun is the best and it doesn’t require a big budget to implement!